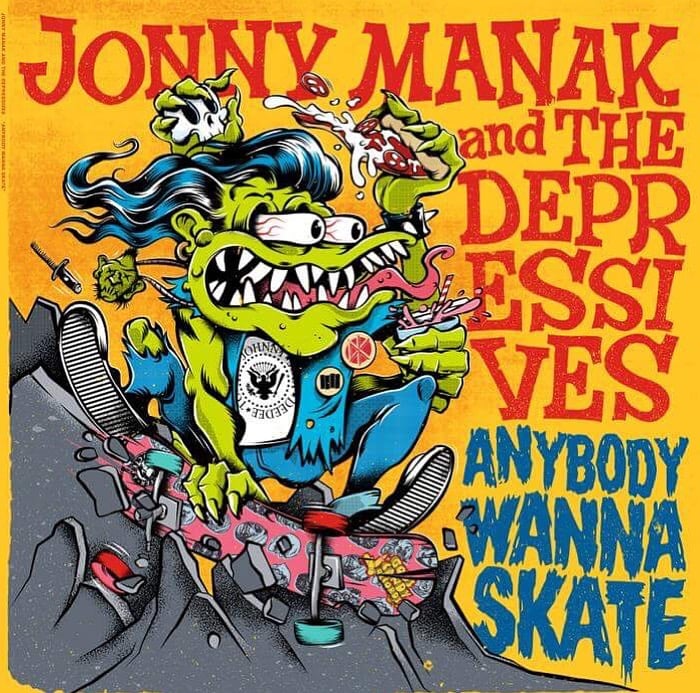 Although Jonny Manak (or “MAN” as his friends in the adult film industry call him) creates the kind of breakneck garage rock that is sure to bring a smile to the faces of many juveniles and coulrophiles alike, he is a very complex man. Manak cut a new platter with his band The Depressives, a super octane fueled San Jose power trio that kicks out the jams in a Motor City style that’s all their own. Their new long-player, titled Anybody Wanna Skate is a concept album that details the trials and tribulations of Manak’s alter ego, Vladimir Puta, a Russian ice skating drag queen who is on the run from former members of the KGB.

“That’s not even true, you ass!” admits Manak, “And if you even try and print all that shit about me ice skating in Russian drag, I’ll totally fire you from writing this stupid one-sheet bio.”

OK then, while Manak was reinventing skate-rock with this outstanding new album that was mastered in organic analog glory, he also took up a side project—writing a short novella entitled “The Lavender Lincoln Log” about a boy in purple pantaloons who was afraid to take showers in the locker room. Manak explains, “Why can’t you just write me a normal bio, man? All this crap about me dressing in drag and writing books about kids who take showers in Victorian underpants is just fucked up. And it’s not even that funny.” Manak adds, “What the hell is wrong with you? I don’t know anybody in the porn business and why can’t you just write about my music? Don’t be such a jerk.”

Anybody Wanna Skate opens with the title-track that’s sure to fuel the adrenaline of any skate session, be it ramps, pools, priests, parks or curbs. This lightning-in-a-jar of a song blends the muscle of yesteryear’s early recordings by The Sonics and Ramones with more distorted and hook-laden power rock that is at times reminiscent of The Buzzcocks’ finer moments.

“I’m Sick Of Feeling Sick” balances the raw catharsis of sobriety with gang vocals that come together like the Misfits throwing a Russian drag party that gets crashed by a purple pantsed Iggy Pop. “Dude, I told you to cut that shit out!” says Manak.

“70s Too Young For Lemmy To Die” is an ode to the late, great Ace Of Spades, Lemmy Kilmister. Loaded to the gills with Velcro catchy riffs, this one is a contagious standout that throttles down the freeway of rock with unrelenting rhythmic blasts and Manak’s Ritalin-deprived vocals laying down a hyperactive love for the revered frontman of Motörhead.

Manak’s lives up to his surname on “It’s A Shame,” a blistering opus of garage punk mayhem that features what sounds like a man on the verge of a nervous breakdown gargling glass and then barfing blood all over a Shure SM58 microphone. This song makes GG Allin sound like Leo Sayer. Although he has yet to go public with the following information, the heavily reverberated “Surfing Swami” muses on Manak’s health issues, as he recently tested positive for diarrhea. Manak expounds, “Alright, man. That’s it! You’re fired! I should’ve just written this thing myself, damnit. That song has nothing to do with diarrhea! If it’s about anything, it’s just a song that shares my love for classic surf music like Dick Dale and The Ventures. And since you’re now officially fired from writing this thing, I’ll just close by saying thank you to everyone who helped us record this beast of an album, including Mike Wells who did the mastering in LA and Gods Candy Records for pressing this baby”